I CHOOSE TO USE, SPEND... AND REPLACE MY WEALTH WITH CRYPTOCURRENCY!!!

I have a dream...a cryptocurrency rise to challenge traditional money and its gods...
Anyone care to join me in my resolve to rebel?

Once upon a time, the first cryptocurrency rose to challenge the supremacy of the Federal Reserve and its fiat paper notes it called "money". It was BITCOIN, a revolutionary phenomenon born out of sheer technology and the digital age. Nope..you can't see it..it has no physical form...but a mathematical calculation of numerical equations to solve a series of algorithms in the fastest way and in turn, generate a numerical answer to form an encrypted sum, which can be used to pay for goods and services, governed by a blockchain.
A digital non physical payment exchange that can either stand its own or with exisiting fiat currency.

At first, the "Federal Reserve Gods of Fiat" were not even remotely bothered with its existence in the form of BitCoin but now, with Bitcoin's value nearing USD8,500 and climbing again (not to mention it was once traded for as high as USD20,000 a coin),
BitCoin, as well as host of other cryptocurrency coins spawned from its success is now seriously challenging the supremacy of fiat currency and I think this is the reason why traditional banks and even VISA and MasterCard are holding their Custer's Last Stand against the BitCoin Sitting Bull, by refusing to recognise Cryptocurrency as its legitimate contender.

I am writing this as a "rabble rouser" to force the legitimacy of cryptocurrencies as a payment system so as to ease the burden of the poor and the unbankable and bolster income and purchasing power of both businesses and consumers alike.

I suggest that the blockchain miners, exchangers and cryptocurrency mining rig operators gang up together and form a cryptocurrency bank to issue a full functional debit card or a QR code based android pay for the purpose. Any comments for and against (and why) are most welcome
Posted by Unknown at 04:37 No comments:

A new update with a new perspective

Wow! Time sure travels fast! It has been quite some time since my last update,,,and as I ponder over the events that are happening ever so quickly both in the financial phase and the political climate in many countries including my own, I have begun to see a new perspective on a new horizon of things. First, as we argue over the volatility of fiat currencies and the evident sharp rise of cryptocurrencies like Bitcoin (and the alter-ego, the Bitcoin Cash or the many other names you call it), it has become evident that we are living in a new phase of the digital age. Cryptocurrencies, as I see it, has become a new hope (does it ring like the Star Wars version? heh heh) for many countries and their peoples bogged down by ever increasing international debt to the super rich inner circle, Mny people and countries have found a viable alternative to MONEY as a tool for exchange for many things, including essential goods and services without hankering for more fiat currency that is quickly losing its value. I would now take the opportunity to echo the advice of many people - now is the time to jump on the crytocurrency bandwagon, get some Bitcoin, Litecoin, Dash, Dogecoin, Ethereum before their value goes beyond reach like Bitcoin now touching the USD3K mark. Not to mention political upheavals can make what you have in fiat currency become zero in value. Now is the time to get a miner hardware to mine your own crytocurrency units, or spend some time on the free faucets available online and then invest your cryptocurrency in some good programs like TradeCoin Club. I am making some money there so you know it is safe. The link to go to is https://office.tradecoinclub.com/register/dboeyong1

There is another program that will help you earn USD10 worth of Bitcoin a day.
Here's the link: Earn free bitcoin

Have just 0.0001 Bitcoin to invest? There is a program that allows you to...
Click on the link below to find out how:
http://www.bitcoinmomentum.com/ref/8ac5432c16

Accept Bitcoins for your business or have people sending you bitcoins? Get yourself a free easy to remember wallet!

If you accept bitcoins for your business, get an easy to remember bitcoin wallet address like mine instead of long numbers: Click to get it free. boeyong.bitcoinwallet.com
Posted by Unknown at 17:00 No comments:

Make Money shortening your URLs and inviting others to do so as well!

As fiat currencies plummet in value, everyone is again looking to precious metals to hedge against inflation and to cushion the ever climbing high cost of living. Gold and silver seems to be the best bet. But Gold is traditionally the one that is the most sturdy of the two. Because while silver is more commonly used as currency and in other fields of technology and science, gold is almost always hedged in the form of either jewelry or stored in vaults as ingots. And Bitgold.com has come out with the best savings and investment model I can see and trust for gold. You can start with as little as RM10 (about USD3) and make your way up. All the gold that you buy is stored for you in the vault destination you designate. And when your gold level reaches 1 gram, you get a MasterCard to essentially withdraw on profits with your gold (when your gold price rise) or your balance. I like the savings model very much and everything is secure. Where else can you buy and save in gold for as little as USD3? If you would like information on Bitgold, just hop here:
http://tracking.bitgold.com/aff_c?offer_id=23&aff_id=53435

Top up your gold balance with spare change

You might not know the power of spare change in your BitGold balance! Use BitGold as part of your savings program and nest egg. As and when you are able to. Even a small USD5 deposit a month can make a difference. And who, besides BitGold will give you a free prepaid MasterCard once your balance reaches just a meagre balance of 1gm of gold? I would say. none. Spare change don't mean much nowadays, what with inflation and the uncertainty in the value of fiat currencies. But it does and will make a difference in a BitGold account as gold you can withdraw, either in physical metal or monetary value.

And.oh yes..I almost forgot to mention, when you join Bitgold for free, you will also receive a small amount of gold for free, even before you put in any money! Is this fantastic or what?!

BitGold is an online platform that makes gold accessible for payments and savings. It’s like any other bank account in that you can deposit your local currency but your money is denominated in gold.
Your Gold is stored in insured Brink’s depositories located in Zurich, Hong Kong, London, Singapore, Toronto, Dubai, or New York City.
Think of BitGold as PayPal but denominated in grams of Gold. You can transfer or receive BitGold for free with any other BitGold user (except US users), and you can spend it anywhere at any point-of-sale with your BitGold Prepaid Card.
BitGold account holders may deposit money into their account via Bank Wire Transfers, Credit Card, Debit Card, China Union Pay, Interac for Canadian users and ACH from selected US Banks.
Posted by Unknown at 23:24 No comments:

You won't believe the wonders RM10 can do for your business! 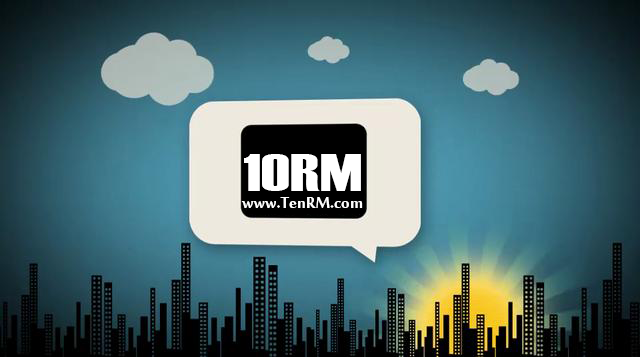 TenRM is the Malaysian’s largest marketplace for services starting at RM10
Everyone knows we need to advertise our businesses but not many know how and where to find cheap advertising that is effective and works. Especially in hard times. TenRM is the white knight that has come to the rescue, with the development of a concept that provides cheap, affordable and yet effective way of presenting your business and services, plus an opportunity to network amongst your business peers and widen the scope of your business.


You just need RM10 to become a member and the possibilities are virtually endless. Visit them at this link: https://tenrm.com/

Not enough money to spend? Want to increase your income? Then help me introduce this crystal card to your friends and relatives. No selling. You don't need to. Just start with giving a card to them for use on their car's petrol tank and they can see results within minutes, a much better more powerful performance and at the end of the month, a decreased petrol bill. We also have a very viable plan that can make you big money. How big? Would RM500,000 in two years interest and even intrigue you? Then come for a no-obligation discussion this Wednesday at 8pm to meet me. I will be at our office cum training centre - 90A, Jalan Tun Sambanthan, 50470 Kuala Lumpur. Call/Whatsapp: +60105171438 (David Boey) and if you have whatsapp, just add me and I will update you with information and pictures. This card has proven to be quite effective and movable (in both sales and acceptance by the public everywhere we go). Not available in stores. Come to our centre and we will answer any question you may have. We offer 7 Day free trials with moneyback guarantee on our cards. 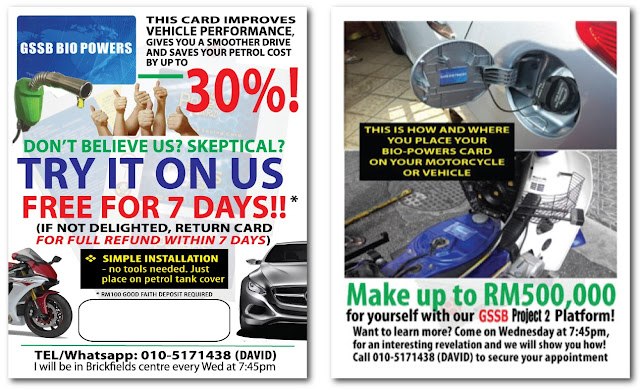